My friend Miguelito on the Orff-Afrique trip showed me some of his photos and compared to mine, it felt like the difference between Da Vinci and a 5th grade drawing. Besides his superior camera, he also seemed to have a superior eye. And a lot of it came down to close-up shots.

You know how it is. You are on the top of a mountain with a stunning view and you take a photo and somehow, it’s too much. Doesn’t capture the experience because it’s too broad and general. Same with videos of the Spring Concert or Holiday Play. You set up a camera in the back to see all the children all the time and the result is… well, boring. Especially after being used to the close-ups used in TV and movies.

So the next time I took a photo, I tried to zoom in and it did seem more satisfying. This was from a traditional religious ceremony where they folded in some Islamic prayer (even though they’re not Muslims) and this little boy was sitting in the midst of this sea of women. 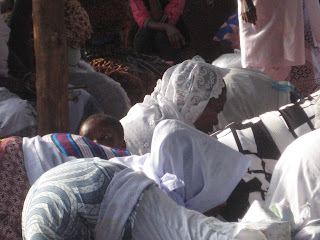 The forest is interesting, but the real stuff of life lies in each unique tree. In my own teaching, I concentrated on the panoramic view of the general group energy, but as I progressed in my field, started to pay more attention to each child in the group. In fact, both are important, but the real impact comes from those close-up moments. And it’s not the camera that does the real work (though high-quality ones can help), it’s the eye and the attention. It’s about focusing on the details to remind us of the moments that stand out.

In photography, teaching and life, a reminder to look closer.
Posted by Doug Goodkin at 10:23 PM