I’ve been in Ghana four times now, but I’ve come to Spain some 24 times at least. So it’s no effort to shift from Dzodze to El Escorial outside of Madrid, to go from jolof rice to gazpacho, from wet heat to dry heat, from English (with a dab of Ewe) to Spanish, from water in plastic bottles to water from the tap, from bargaining at the market to fixed prices at the store. But the wheels of what defines cultures and what makes each unique and what parts of human possibility get opened, left alone or shut down, are still turning in my brain.

In the Orff-Afrique Course, I gave a lecture on Orality, Literacy and Electronic Cultures and it’s a worthy topic to understand how people are formed in each. Too long for here and I’m considering a small book on the subject. But the differences are real and interesting and awareness of them provides a lens into who we are and how and why. And equally a peek into who we might be armed with this knowledge.

My last full day in Ghana, we went to a village and the Body Music folks gave a workshop for the local Ghanaians and also performed for them. Then the locals performed for us, as they always do and then we tried a five-minute collaboration joining the two worlds. Which was actually quite funny, because as the Western folks played a body percussion pattern, the Ewe musicians said they had some patterns that fit well with that and started to play. Of course, we couldn’t hear the relationship between their parts and ours, a bit like two separate worlds colliding, until Kofi grabbed a bell and started playing a loud beat. Well, that helped. But it was hardly a seamless new piece born from the confluence of two distinct cultures!

This stimulated much casual discussion afterword, especially the response—or apparent lack of response—from the elders in the village to the performances, which included clowning, body percussion improvisation without a song, beat boxing and more. At best, they seemed mildly curious, but it struck me forcefully that for some of them, this might have been the first live music different from their own that they have ever heard. (Probably the younger folks are hearing some on Youtube and such, but to see it live is different). And since music for them is tied to very specific meanings, occasions, stories and cultural practices, the idea of listening to something just for the aesthetic pleasure of a pleasing combination of sounds is something quite foreign to them. Since music and dance are truly a language for them, the idea of listening to someone stand up before them and speak Swedish is perhaps intriguing for a minute, but holds no interest after that.

And this ties into the profound difference between an unbroken oral culture and a literate one. In the former, the meaning of music, dance, images, textile designs, craft, stories, recited text and more is almost always an inherited collective meaning. It ties the community together, affirms the ethnic identity of each member of the community and sends the culture forward into the future by its connection with the past.

By contrast, a literate culture offers choice. Yes, literacy in the West began with a communal bond of reading the one published book, the Bible, but it wasn’t long before the tool of literacy spread scientific thought, mathematical formulas, myths and fables and history and fiction and poetry. As libraries grew, three significant things happened:

1)   In oral culture, knowledge is specific to the immediate environment and what is needed to be known to survive and thrive. No hunter-gatherer is marginalized because they don’t know how to farm and certainly no farmer needs to know what the exports of Chile are or no desert dweller need be curious about how wine is made. Likewise, no Ewe villager needs to experience Bach, Bird or the Beatles to be a complete member in that community.

By contrast, in literate culture, knowledge is expanded beyond one’s immediate surroundings and experience. One could imagine oneself into a different time and place through literature and art and travel documents, be exposed to ideas outside the scope of one’s local knowledge, know things second-hand through other people’s experience and thought.

2)   In oral culture, the elders tend to hold the cultural lore and again, need not know things beyond what is useful, practical and necessary to their identity—the creation myths and stories of gods and ancestors and such. In short, they need to know precisely what they need to know to carry on their inherited identity. In literate culture, identity can be cultivated beyond one’s inheritance through the act of reading books, viewing art, listening to and playing music, eating different cuisines, investigating other religions.

Thus, a New Jersey Jew may end up wearing a Sari, changing her name to Sita and living out her life in an Indian village. A Japanese person may become a world-class banjo player and a Brazilian may become an expert in Taiko drumming. You get the idea. In short, identity in literate culture can be consciously crafted and cultivated.

3) Since it’s impossible for a single human being to read every book ever written or play every
style of music, the role of choice is paramount. What we read, what music we listen to or
play, what art we view or make, what food we eat or cook, what clothes we wear, what
religion or religions we practice, where we travel and how much, who we choose to love,
etc. is the way some of the more interesting identities are formed in the Western world.

To be well-read and well-traveled and well-educated in a variety of arts is a value in our
literate and post-literate world, but it doesn’t necessarily make sense for the Ghanaian
villager.

So when we have cultural encounters like we just experienced in Ghana, the two groups are coming from two very different perspectives, two very different needs, two very different appetites in getting to know a larger world. The explosion of interest in djembes and African-inspired dance in the West is a known fact, an addition to our (necessarily)  narrow definition of music that awakens bodily responses and emotions that Beethoven can’t reach. We hear it, have some a-ha moment that says, “Ah, this is what I was missing!” and start saving money to go to Ghana with the Orff-Afrique course. By contrast, I suspect the Ewe villager is not hungering for Bach or if he or she hears it, is not thinking, “Ah, that’s what I’ve been missing in my life.” (Of course, it could happen that some indeed might have the experience, but I suspect that the vast majority don’t. I don’t believe the elders in the performance the other day were thinking, “Hm. I want to get me a recording of that vocal bass solo Bryan did. It was really cool!”)

Does any of this make sense? No judgment, but hopefully an interesting perspective. And this from a guy who has built a life on an ever-expanding circle or art, literature, music, travel and more that has given me so much more than my childhood “Leave It to Beaver “TV show promised me. I'm not smarter or more interesting or larger than the Ewe villager who has absorbed the full measure of their inherited identity without even leaving their village. It's not necessarily better to be more well-read, well-traveled, schooled in diverse perspectives. It's just different.

At the same time, because the vast majority of the world has chosen the literate route, the ability to negotiate diverse perspectives and points of view will serve to better navigate through the world we have now. As this photo shows, the ancient practice of welcoming visitors through a specific ritual with the local chief lives on, but note what the man in the sunglasses is doing. That changes everything. 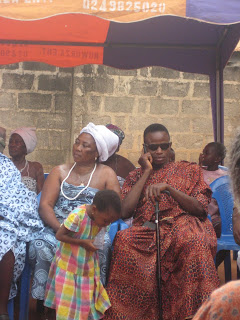