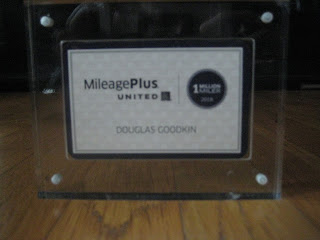 So it was my flight to Ghana that put me over the Million Mile Mark and gave me lifetime status as a VIP on United Airlines. Hooray for me! That’s a notable achievement, reaching a number that high in anything and I feel kind of proud and think I should boast about it and drop it into casual conversation. Though I’m way past the pick-up scene in bars, I’d like to imagine:

Me to attractive (and of course, intelligent and kind) woman: "Do you come here often?"

Said Woman: "Every now and then. And you?"

Me: "Well, I find it a nice place to unwind after yet another trip with my Million Mile status."

Woman: "My place or yours?"

Besides the rise in my social standing, I do genuinely appreciate the perks of Priority luggage and the lounge and economy plus seating and not paying for bags and such. It makes the chore of flying a bit more attractive for this aging man. For example, I flew from Barcelona to Montreal last night, 8 hours with no movies offered in my cramped economy seat. The flight from Montreal to San Francisco was full, so I got upgraded to Business Class. Sweet! Passed the time watching Molly Bloom and Downsizing.

But Downsizing began as a typical light comedy and then got pretty heavy about climate change and the end of the human experiment. So my Million Mile achievement turned bittersweet, part of me feeling some shame that I have taken part in excessive burning of lots of fossil fuel. Unlike fellow Million-Miler George Clooney in that movie who flew around the world firing people that no one else wanted to deal with, I like to think that I’ve used the fuel for the betterment of the world and the children in it. That I’ve traveled to places to learn from the people there, to admire their culture and let the rest of the world (especially Americans) know that there is so much more happening in places different from the wars, pestilence, famine, coups, terrorist attacks, poverty, that the news likes to report. That I’ve brought ideas and practices learned abroad back to the children I teach and spread the good news about what we’re doing well in our school to other places that hadn’t considered it. But still, excessive fossil fuel use is excessive fossil fuel use. All of which would have happened without me taking a seat on each plane, and yet, still I have contributed to the diminishment of resources.

It reminds me of that scene in the movie The Misfits where Clark Gable is capturing wild horses, something he has done his whole life and is proud of. Marilyn Monroe begs him to stop and he finally relents, sets the horse he captured free and says:

“Damn them all! They changed it. Changed it all. Smeared it all around with blood. It’s like roping a dream now. Guess I just have to find another way to be alive…”

Yep! People fly in from around the world to go to Climate Change Conferences and the irony is simply what we have to work with and live with… until we can’t. Meanwhile, happy that my bag came out sooner than others and looking forward to the next three weeks of local teaching.
Posted by Doug Goodkin at 6:38 AM