Yesterday my colleagues James, Sofia and I had a farewell luncheon with the four marvelous Interns we’ve shared our life with—both in and out of school— these last four months. They are still with us this week, savoring the bittersweet last five days of Play production, ice-skating, the St. George play, Holiday Singing, the school staff White Elephant sale and more. But in terms of their study as apprentices to our style of music education, our work is done. They taught many supervised lessons to kids of all ages and may I publicly state they were excellent? Not so perfect that we didn’t have any pointers about details here and there to adjust, but the most important things of any lesson came through brilliantly for each of the four—material that mattered to them, a good class flow, a joyful and inviting manner with the kids, an openness to possibility of something new arising in the class while also paying meticulous attention to each detail of the planning.  Hooray for it all!!

So our farewell lunch was a ritual of praise, going around one-by-one and speaking precisely about how they impressed us and what particular facet of artistry, caring and beauty we noticed in our time together. They also got to appreciate each other and at the end, each spoke about their own 4-month journey, what breakthroughs they felt they made and what work still awaits them. The whole process took some three hours, but time doesn’t matter when truth and love are at the table. I believe that each felt wholly valued and deeply known and sincerely appreciated and who can argue with that? Look how happy they are! 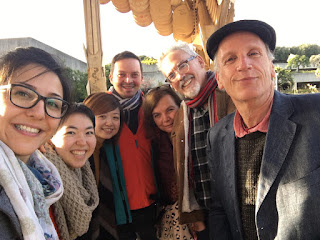 And yet we often neglect the practice of genuine praise. We mostly reserve it for the funeral, the wedding toast, the retirement speech (or roast). And even when we do fold it into our working world or gathering of friends, we trivialize it for lack of language (“You’re awesome!”) or armor it with the wrong kind of humor or make it about the person—"You’re ______” instead of the ways they courageously reveal themselves—“The poem you wrote moved me and showed me how you ________.” Raised in adoration and adulation and unearned self-esteem values, my fellow Americans often err to the side of too much inauthentic praise, even though it be with good intentions.

On the other side is the weird notion that praising people spoils them, some inherited Puritan idea that we’re not worthy and soaked in sin and we’re no better than the next guy and don’t you forget it. In Europe, standing ovations at concerts are few and far between and I admire that, a more rigorous sense of what’s worthy of praise. But it also can crystalize into the habit of constant critique and create a certain grim character in people never openly praised or blessed.

It’s a complex matter, but my own leaning—and that of my school—is indeed to praise and bless young people for on a regular basis. Not according to a timetable, but when they surprise you with a breakthrough. Like the 4thgrade boy who couldn’t get his lines straight in the play, never stayed in character in rehearsal, never spoke boldly with a stage voice and just went through the bare minimum of motions. And then today, he came alive in a way that stunned me. And so in our closing circle at the end of rehearsal, I gave him the praise he earned and didn’t his face light up with pleasure? Wouldn’t yours? Wouldn’t everyone's?

The right amount of praise offered at the right time with the right specific language from the right person with the right intention—to notice and bless—is a gift from the heavens to us struggling mortals. It is light and water to the plants striving to blossom. It can’t be mandated or fit onto a chart of fairness or simply filling a directive or a quota. (Though it can be structured, like our weekly “High 5” e-mails at staff meetings designed to think about what kids did during the week worthy of notice and sending a note home to the kids and parents. And someone keeping track of who received them so a kid who hadn’t yet received one might be noticed more carefully.)

And so who have you praised recently? Who has praised you? Anytime is the perfect time to think about it, but maybe as the year closes, it would be a good gift you can give someone at Holiday time.