A Great Day in Harlem

I spent the day in Harlem yesterday. I’d like to say I took the A Train subway there, but truth be told, I took the 1 to 125th and Morningside Drive to meet Stefon Harris and Michele Wright at Manhattan School of Music. Michele works in administration there and took my jazz class several years back and Stefon continues to impress me as not only one of the world’s premier jazz vibraphonists, but also one of the kindest and generous human beings I know. He always overdoses on praising me when introducing me to others, but I noticed he does the same with everyone, picking out the one (or many) qualities that impresses him about the person he’s talking about, be in a fellow jazz player or an 18-year old student. He likes the way I teach and the way I think about teaching and keeps saying things like, “We should write a book together! We should give some workshops together.” I now know that there will be no follow through, not because he isn’t sincere, but because he has a few hundred other more notable projects on his plate. Still, I’m flattered to hear him say it.

Sitting in Stefon’s office with the big poster of all the jazz musicians in that famous photo titled “A Great Day in Harlem” and another of Miles Davis, Michele told me that this location used to be where Julliard was. That meant that Miles Davis had sat in some of these classrooms. He went to Julliard as a young musician, taking classes during the day and then hanging out with Charlie Parker and Dizzy Gillespie at night. He finally realized that Diz and Bird were the true school he needed and the only tuition was big ears, hard work, experimentation and dedication. He dropped out of Julliard and began studying not for his Masters, but to become a Master. Stefon and Michele hadn’t thought about Miles being there and it brought a new kind of reverence into the room. 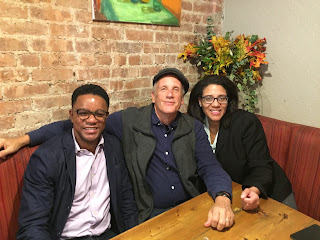 After showing me a bit around the school, they both took me to lunch and then I set off on a mini-pilgrimage to find the Apollo Theater and Minton’s Playhouse, two iconic places in jazz history that I talk about with my 8th grade kids, but had never been to. Ella Fitzgerald got her start at the Apollo in the 30’s and Thelonius Monk held court at Minton’s between midnight and 6 in the morning as Charlie Parker, Dizzy Gillespie, Kenny Clarke, Max Roach and others were working out the next step in jazz’s flowering—be-bop. This also was the place where Miles hung out for his real schooling. They played to probably 10 to 20 people in the audience, earned next-to-nothing, but were true to their calling to find out what else they could say in this emerging expressive language. And it turns out they found a lot to say! 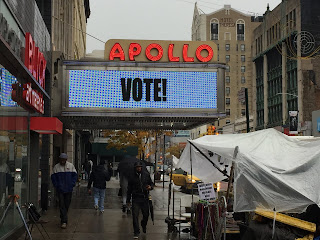 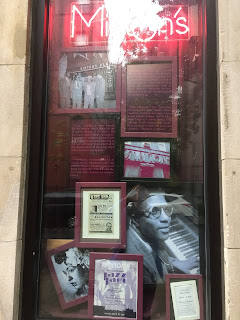 While the country was in the midst of deciding yesterday who would be the next people in positions of power and authority, some by virtue of dark money and lying promises, I was spending time in the landscape of the folks who rose to positions of spiritual and cultural power and authority, achieved through disciplined effort and lives spent living and expressing their truth.  How different we would become if that yawning gap between political power and cultural power was smaller. Both require very different ambitions, one to serve people by helping make better living conditions, one to soothe people who hurt with the things we human beings hurt with some comfort and respite through art. Both can take those ambitions in the wrong direction, turning it toward their own ego and forgetting the service component. When the artist does that, nobody gets too hurt. When the politician does that, it wreaks havoc. As we well know.

After my walk, I returned to Manhattan School and sat in on a Master Class with Ron Carter. And guess who Ron Carter played with back in the60’s? Miles Davis! Lots of intersecting circles to my day! When a student began a question with “You’ve had a long and illustrious career…”, Mr. Carter interrupted him and corrected him: “I’m still having it!” At 81 years old.  Again, it felt right and good to be in the presence of an elder who lived an authentic life doing whatever it took to bring beauty to people. He was soft-spoken, humbly authoritive and generous in sharing his thoughts and a little bit of music with the young people gathered. 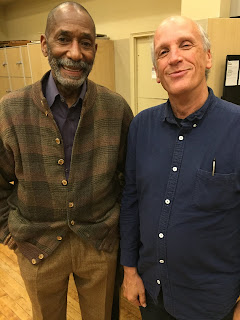 This was a good day to spend a day in the midst of the scary election. It was a Great Day in Harlem!
Posted by Doug Goodkin at 3:25 PM