Yesterday went to the Newark Museum, a place my mother occasionally took me to as a kid. Maybe 55 years ago? I remember more science-type things, but mostly it’s art and the exhibits focused on Asia, Africa, Native American, with a few European and American. Such a contrast!
A trip around the world in some ten rooms. 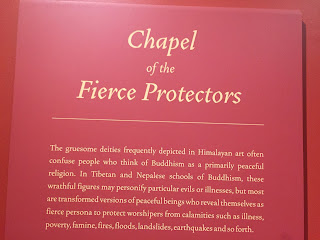 In the Asian section, came upon this explanation of Fierce Protectors and that speaks volumes to me. As a one-time hippy, feminist supporter, teacher of young children, Buddhist, I’ve always leaned toward the peace and love side of the equation and been in the company of those who wish the lion to lie down with the lamb. But as an aggressive competitor in basketball, Boggle, Bulgarian bagpipe and playing be-bop, I’ve come to understand that ferocity is not to be disdained, but placed in service of the right thing. While there are many times and places where gentle words and soft voices and tender compassion are called for, there are equally as many where some kind of ferocious energy is what’s needed—the kind mother bears have protecting their cubs, the kind Coltrane had soloing out into the stratosphere of his deep emotion, the kind that demonstrators linking arms against police attacks can have.

The Buddhists seem to understand this and personify that energy in these gods and demons they call Fierce Protectors, who use their ferocious selves to protect the vulnerable and defend truth and justice. We need those Protectors at this critical juncture and more importantly, we need to embody that energy now. Vehemently refuse the Republican attempts to suppress voting, to intimidate, to cheat so they can continue their attack on human decency and their aim to keep hurting their fellow beings. If the best happens tomorrow, let’s keep those masks by our side to keep and hold that line—fiercely—against further antics. If the worst happens, let’s redouble such ferocity and our vow to protect. It’s hard to roar in print, but yes, let’s summon Katy Perry, Maori dancers, Tibetan masks and make ourselves known and heard at the polls! 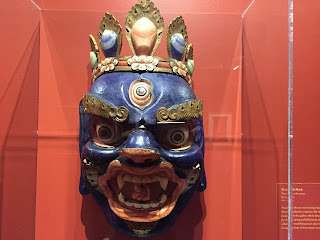