At the recent Orff Conference, a teacher from Texas stopped me in the hall, reached into his backpack and said, “I have a gift for you. “ And he took this out: 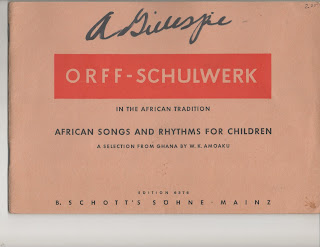 He had found it in a box of books at North Texas State University where my teacher Avon Gillespie taught from 1984 to 1989. It was ready to be tossed and he had the presence of mind to save it.

When I went to say goodbye to my dying teacher almost 30 years ago, I stayed in his house and thought about taking a memento— a shirt, a book, a little knick-knack. But to my regret, I never did and had nothing personal to remember Avon by. And now here was this book. Avon’s presence was only in his signature—no notes inside or any other evidence that it was his (though the book itself was prophetic as it spoken of his African roots married to Orff Schulwerk and the opportunities I’ve had to move that forward in our Orff-Afrique Course in Ghana). But simply seeing his signature was enough to get the tears flowing.

Yesterday, I went to the Jewish Home to play piano as I have these past 10 years and discovered that my dear, dear friend Edie, along with my Mom and Fran, one of the constant companions in our Friday sessions, was on her deathbed. (More about Edie in a later post). That night, I made an altar for Edie that included a little poem to me she had typed up years back. The poem was poignant, but more so, seeing her signature at the bottom.

And then a little red book appeared mysteriously on my desk this morning and my wife said she found it in some unexpected place. It was a travel journal from my Mom’s trip to Europe some 50 years ago and again, seeing my mother’s handwriting called her up in a way that only handwriting can. Of course, photos, smells, keepsakes and such all help keep our loved ones alive, but there’s something special about seeing their handwriting, their full character and unique personality hidden in the swoops and swirls of connected letters.

Teachers, take note. Please keep teaching cursive handwriting and amidst all the temptations of e-mail and texts and emojis and bitmojis and grocery lists on i-Phones, let’s all keep our handwriting alive and well and leave that piece of us for our descendants.

(He says ironically typing this on his blog post.)
Posted by Doug Goodkin at 8:40 AM