It had only been two weeks since I came to play piano at The Jewish Home, but long enough to surprise me with the news that my dear friend Edie Shaffer was on her deathbed. Don’t know how it happened so abruptly, but I was told she had stopped eating and didn’t even want to see her own children at the moment. I asked someone to go in to see if she would see me and she said yes. We had a brief talk and I wasn’t prepared for it all, but it was enough to end with mutual “I love you’s” and a farewell kiss on the forehead. Edie was part of the Edie, Fran, Doug trio and when Fran left us two years ago, she was my last deep connecting link with the folks at the Jewish Home. (She’s on the left in this photo, Fran on the right.  I hope to write more about Edie in an upcoming post.) 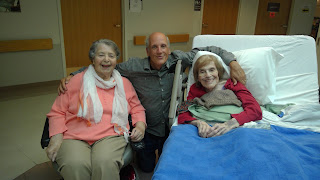 I then went to the piano and played as I do and noticed a lovely woman singing along with so many songs. At one point, I asked for requests and she suggested “Sunrise Sunset” from Fiddler on the Roof. It seemed like the perfect song for the occasion—and it was.

I told the people how I actually saw that musical on Broadway as a kid with my parents, a rare occasion inspired by the fact that my Dad had taken art classes taught by Zero Mostel. Mr. Mostel graciously allowed us a backstage pass and I got to briefly meet the great man. And now that remembrance has yet more resonance because today would have been my Dad’s 100th birthday. He left us 11 years ago and it was a nice way to revisit him. 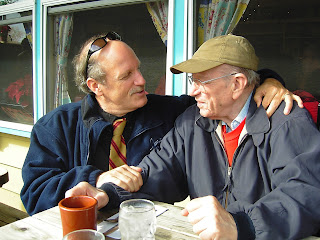 And following the theme of time passing and the old departing and the new coming up, my granddaughter Zadie turned 7 yesterday! And this also was the birthday of my father-in-law Ted Shultz, who passed away 7 years ago (he never met Zadie) and would have been 93. Next week my second daughter turns 34 and again, the numbers astound. “Is this the little girl I carried, Is this the little boy at play? I don’t remember growing older, When did they?” 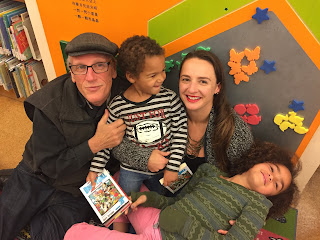 And so I join the 7 billion other souls who are continually surprised and astounded by these markers of time passing, laden with happiness (Hooray, Zadie!) and tears (I’ll miss you so much, Edie) and bittersweet remembrance (Dad, Mom, Fran and so many others).  On we go.