“It is not simply a matter of having experiences, but also of setting life experiences within the narrative of soul; only then can experience give birth to genuine meaning.” –Michael Meade

Last night in Greenwich Village, I had dinner with my friend Don Giller at John’s Pizza, a place I used to go to with my first girlfriend back around 1971. Happy to see it was still there. I hadn’t seen Don in about 10 years and then only a few times since he moved from San Francisco in 1978. Back in 1973 in San Francisco, he and I were in charge of the music  of a dubious production of  the play The Virgin Spring and needed to meet with the dance director. We walked through Golden Gate Park to her house near the ocean and in the course of the evening, met her roommate Karen. Don and I were just about to start a choir singing the works of Renaissance composer Johannes Ockeghem and discovered that Karen had sung early music in Boston. She was interested in joining the choir, we held rehearsals at her house and soon after, we started dating. She got a job as the first art teacher at an independent school and through that contact, I got a job as the first music teacher at that school. (She retired after two years ago after 42 years of teaching there, I’m still there in my 44th year).

Karen and I moved in together in 1975 and decided to do a year trip around the world in 1978. We drove her old Pinto across the country, stayed at my parent’s house in New Jersey, sold the car and on the way to the airport, visited Don in New York. He took a photo of us about to embark on a most marvelous year of travel before returning to resume teaching at the school for the next four decades. 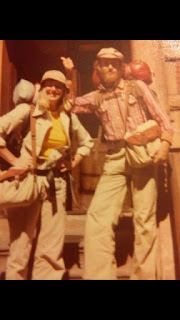 So last night at dinner, having fun recounting all this long history and more (“Whatever happened to so and so? Have you heard from…?"). Don took a photo of me and wondering if you, the reader, notice something interesting. 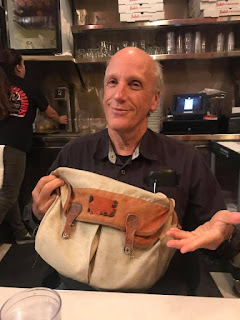 Yep! That's the same bag 40 years later! Don was happy to hear that someone was as much a pack rat as him! And it’s true that I have cassette tapes still of various things I recorded, a basement filled with records, file cabinets with every workshop I ever taught, a trunk full of old letters, a basket filled with old T-shirts and such. All waiting for me when I retire.

Back to the opening Michael Meade quote: What does it all mean?

It could read as laziness, over-attachment to one’s own past, inability to let go. But for me, I think the meaning is my sense that everything that has happened to me and that I make happen has a meaning. Of course, in the big picture of an indifferent world, it’s easy to say nobody cares about my little biography and it means absolutely nothing. But if I don’t want to claim too much for my little life, neither do I want to claim too little. That quote was from Meade’s book Awakening the Soul: A Deep Response to a Troubled World and if you accept the premise, which I do, that we each come into this world accompanied by a purpose and a reason and a guiding vision, then indeed the thread of one’s own past becomes part of uncovering that meaning, all the little twists and turns that needed to happen to lead to the next revelation of purpose. It felt meaningful that Don and John’s Pizza and the Café Wha (that I went to 50 years ago at 17 years old) were all still here on the planet and good to note what was the same about me now as it was then and what was different.

That’s part of the meaning for me. Then there’s a loyalty I feel to friends and places and faithful companions and that bag has literally been around the world with me. Several times. And then the ecological model. It ain’t broke, it still works well when I have less than a backpackful of things to carry, as my daughter would say, it’s my functional Manpurse.

And finally, that sense of continuity and soul and loyalty and purpose in a world that feeds cynicism, random rapid change, sports figures trading loyalty for money, the despair that comes with meaninglessness, is an affirmation of living life with meaning far beyond the simple dismissal and negative image of “pack rat.”

Now to print this out and put it in my filing cabinet. J