Turn to the West

It’s been over a year and I still can’t get over the big Sales Force Tower wart on the once beautiful face of downtown San Francisco. I get pissed off every time I see it and I can’t help but see it a lot. Then had the brilliant idea of turning the other way.

Of course, short of walking, biking or driving backwards downtown, I have no choice but to face it. But the truth of the matter is that looking West in San Francisco, I can still feel the city I’ve grown to love these past 45 years. The Sunset and Richmond Districts have been spared the High-rise Mania Disease, the great green spaces of Golden Gate Park, Legion of Honor, the Presidio and more live on unblemished by the smear of development, beautiful buildings like the USF Cathedral, Laguna Honda Hospital, the Legion of Honor Museum, the Palace of Fine Arts still carry the character of the old California architecture.

The other day, I went to Land’s End to watch the sunset and wasn’t that lovely. See for yourself. 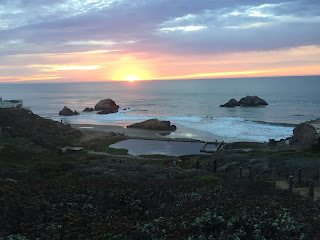 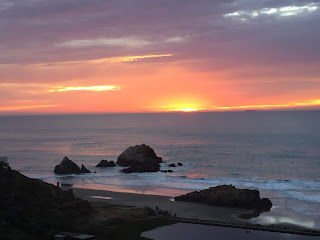 Today, I walked the full length of Fillmore Street with its one-story shops with one-of-a-kind clever names like Hi-Ho Silver, Site for Sore Eyes, Primp Salon, Gimme Shoes, Seconds-to-Go. The Clay Theater, one of the three remaining single-screen theaters in San Francisco, still thrives, D &M Wines and Liquors was there when I briefly lived on California St. in 1973 and still is, the Fillmore Jazz Festival fills the streets each year and the mix of bookstores, gift stores, florists, health salons, antiques, restaurants, cafes, pet stores, clothing stories, art galleries, the newly-imported-from-Portland Salt & Straw Ice Cream just down the street from the good-ole-days bar and music club, the Boom-Boom Room, make it a delightful place to walk through and even shop.

From Fillmore St., I turned towards Alta Plaza Park, with its Playground with a View and again, the turn to the West rewarded me with these sights. 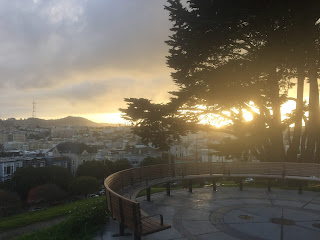 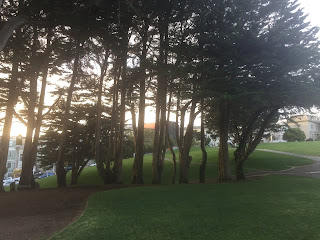 My fellow elders and I love to complain about the San Francisco we once knew slowly disappearing and it’s true that rents and housing prices and carte blanch downtown high-rises are no joke. But still there is much of the city to love. Not the least of which was Forbes Magazine naming it as the most liberal city in the United States. Yeah!

I can listen to Tony Bennett sing with a clean conscience— San Francisco, those “little cable cars” may cost $8 one-way, but my heart is still with you. At least when I'm looking West.